From personal experience with a great company the issue may not be as simple as some think. When you claim to be an equal opportunity employer try to avoid pre picking a candidate and grooming them for the position. Firstly your integrity fails, it is obvious.

Secondly your credibility and all pretense just went out the door. Unless you are prepared to bypass the applicant process and just offer the position with out asking for applicants. But that undermines the Equal Opportunity part. Offering a position and pulling it is not conducive to getting the employee you are seeking.

Particularly when it is reoffered with a greater ask and lower offer. Repeating that with an even lower offer makes you look ridiculous. There are so many failings in middle management in so many companies. I still work for the company, I have not found an alternative position that would pay as well.

My enthusiasm and can do attitude. Remember there may not be a departure, but there will always be a cost. Leon 3 years ago Hmmm… sounds a little bitter. My job these days seems to be cleaning up code after the cowboys leave for the next sexy project, so that we have maintainable applications that run.

I get my work done on time and my releases cause no drama. Elizabeth 3 years ago You just wrote an article that explains why I quit every job I did. Steve 3 years ago I recently resigned from a well paying job for which I had moved miles cross country.

The company paid me a lucrative sign on bonus as well as paying for my moving expenses for which I signed a two year contract. It turned out to be the job from hell. Without going into details i will try to tell you why.

The lead technician my direct supervisor was demeaning, condescending, lazy and showed favoritism to those she liked. Sadly she was friends with the next manager up so I never went to that manager feeling that nothing would be done about it.

After 3 months the other technician that was hired with me quit.

Other issues were overbearing, condescending doctors who refused to alter the way they did things and upper management who continued to let them waste money, time and resources. Antiquated record keeping and reporting with lost charts that somehow became the technicians fault.

Faulty orders and billing codes which were also some how the technicians fault and the list goes one. 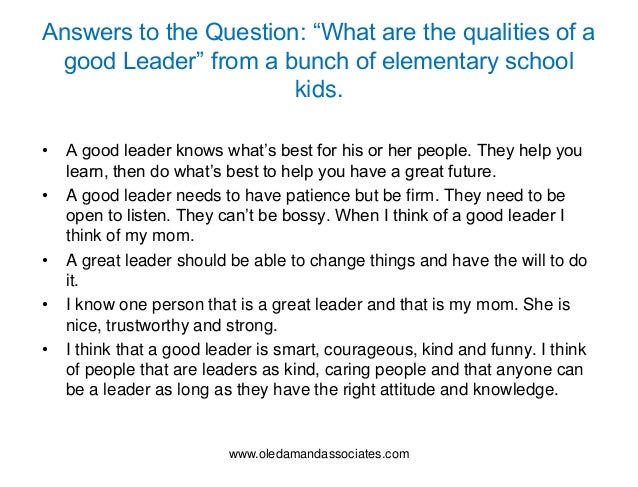 I finally realized after 6 or 7 months that this job was making me physically and mentally sick. While my future is sort of up in the air I am making more money and working with much nicer techs, nurses and doctors than at my previous job.

Frank 3 years ago The article can be distilled down to its subtitle: In my experience, two reasons:An Online Encyclopedia of Roman Rulers. DIR Atlas AUGUSTUS (31 B.C.

- 14 A.D.) [Additional entry on this emperor's life is available in DIR Archives]. Garrett G. Fagan Pennsylvania State University. Introduction Augustus is arguably the single most important figure in Roman history. Expository essays on what makes a great leader are focused on explaining the difference between an ordinary leader and a great leader.

Expository Essay on What Makes a Great Leader. By Lauren The leaders’ incentive should be the goals of the organization or group they are leading. Good leaders should have the goal as their central.

THE FALSE ALLURE OF GROUP SELECTION. Human beings live in groups, are affected by the fortunes of their groups, and sometimes make sacrifices that benefit their groups. (Also see: In defense of brainstorming) The most important thing about a brainstorming session is what happens after it ends.

What good is it to find great ideas if they go absolutely nowhere? The authors would like to thank the people involved with #libtechgender discussions, especially Coral Sheldon-Hess, for getting us thinking in this grupobittia.com might not have pursued writing this article if not for their important work.

We would also like to thank our support group of other female librarians for their insight, personal experiences and quotes that helped frame this work. Jul 14,  · Exhibit leadership traits A good leader is usually passionate about the organization and his or her work, exudes confidence in his or her abilities, can organizes and makes sense of complex.